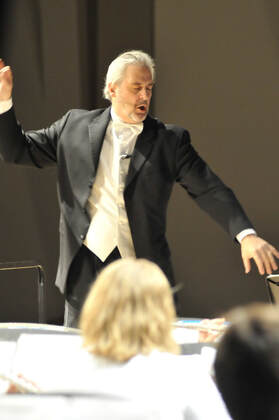 Aerophone director, Vic Esposito
​As a budding young musician, Mr. Espositos’ parents encouraged him to join the carpenter’s union. While a noble profession, Mr. Esposito decided to attend the University of Rhode Island instead where he earned BA degrees in Music Education and Classical Guitar Performance. Mr. Esposito also earned a Masters Degree in Music Education from Western Connecticut State University and has also attended numerous clinics related to conducting and education.

He has spent his entire career in music education. For the last 30 years, he taught at Cornwall Central High School before retiring in 2017. Along with being the department chair for the Fine and Performing Arts, he also conducted the Concert, Jazz and Pit Bands. Mr. Esposito also taught AP and College Music Theory. He has also conducted High School All County groups and chaired/hosted numerous All County Ensemble Festivals in Orange County and Zone 9 Area All-State Festivals.

Mr. Esposito considers it a great honor to have been selected to conduct the Aerophone Community Band for the up-coming season. He is extremely excited to take over “The Podium” from Mr. Holod. He would like to personally thank Rich for his hard work and dedication over the past 10 years in creating this organization. Mr. Esposito would also like to thank Rich for giving community members and students the opportunity to perform. It offers a great deal to the surrounding community.

Mr. Esposito resides in Milton, New York with his wife, Lisa. They have 3 children, two cats, and a very rambunctious dog named Roman. Since retiring, Mr. Esposito has been enjoying listening to great music, practicing, performing and cooking! When not immersed in those activities, he gladly tends to his garden and whatever “chores” his wife finds for him. And yes, a bit of carpentry as well!

Aerophone director Richard Holod
Aerophone was founded by Richard Holod, who is the director of the wind ensemble and jazz ensemble at Roy C. Ketcham High School and of the bands at Myers Corners Elementary School in Wappingers Falls, N.Y. He earned his bachelor’s degree in music education from the Crane School of Music at SUNY Potsdam. While there, his major instrument was trombone, and he performed with the wind ensemble, jazz ensemble and trombone ensemble. Mr. Holod later earned a master’s degree in elementary education from SUNY New Paltz.

His professional career began in 1989 at Ellenville High School in New York's Ulster County, where he taught instrumental music to students in the middle and high schools. He has been teaching in the Wappingers Central School District in New York since 1998. During that time, he has taught at the elementary, junior high and high school levels. Under his direction, the Ketcham Wind Ensemble has consistently received New York State School Music Association’s highest rating of Gold with Distinction. He has also hosted, organized and guest conducted music festivals throughout the region. In August 2013, he was invited to Grottole, Italy, to guest conduct the community band there. In 2016, Mr. Holod completed a conducting seminar at Temple University (Philadelphia), under the instruction of Dr. Emily Threinen, director of bands at the University of Minnesota School of Music, and Kevin Sedatole, director of bands at Michigan State University.

Mr. Holod founded Aerophone in 2009 as another outlet for musicians who are passionate about band literature and want to enrich their playing experience by rehearsing and performing with others who share their enthusiasm.  Mr. Holod retired from Aerophone at the end of the 2018-2019 season after 10 years of dedicated leadership.  We are very grateful for to him for creating such a wonderful organization and opportunity for musicians of all ages to make great music together.